A couple of months ago, during a hike near Julian (CA) I saw a committee.
I was quite amused when I learned this meaning of the word “committee”, which, in this context, means a group of vultures sitting together. If they are eating, then, it is a wake, and if flying together, then it becomes a kettle. Someone must have had a lot of fun inventing these meanings and making things more complicated for everybody else.  ¯\_ (ツ)_/¯
The pics I got from this visit were not very good because the sun was setting and it was difficult to find a good angle. So I went back the week after and was able to catch close-up pics of one of these vultures.

The turkey vulture got its name due to the similarity to the wild turkey, which, conveniently I was able to photograph the very same day I saw the committee. 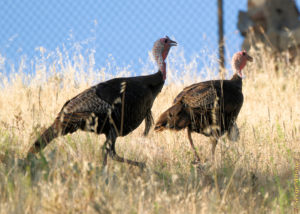 The turkey vulture is a carrion eater. It looks for and eats mostly dead animals. So this bird has a special function in a way, acting as a nature cleaner. What is much more remarkable about this bird is that, in order to be able to do that, it had to evolve some rather unique features.

First, in order to find the dead animals, the turkey vulture can hang glide for hours, searching with its sharp eyes. But it’s not just the eyes which are sharp, it’s also its sense of smell, which has been proved to be particularly acute in detecting decay gases. In 1936 an oil company discovered that they could find leaks in their pipelines by watching for vultures attracted by the smell of a rotting food smelling chemical added to the gas. Some sites mention a sense of smell 10,000 times better than ours. But of course, it might just be fine tuned to find rotting animals, where we may be able to recognize a wider range of smells if they are strong enough for us to detect them.

It’s one thing to find a dead animal easily, but it is yet another to be able to eat and digest its rotting flesh. In order to be able to do that, the turkey vulture evolved a digestive system which combines high level of acids and a set of rather nasty microbes, such as those find in diseases such as tetanus, gangrene, botulism, etc. You and I would not survive long with that stuff in our stomachs.