Today we have only 4 pictures of 2 animals but they have some common features: they were both photographed at night right on my street. And, although the encounters didn’t happen on the same night, they were only one week apart.

First we have a bobcat. This beautiful feline climbed up the dead tree in front of my house, just as I was taking a picture to test my flash. When I took this first pic I distinctly saw 2 bright dots in the dark. As you can see, even the camera caught them: 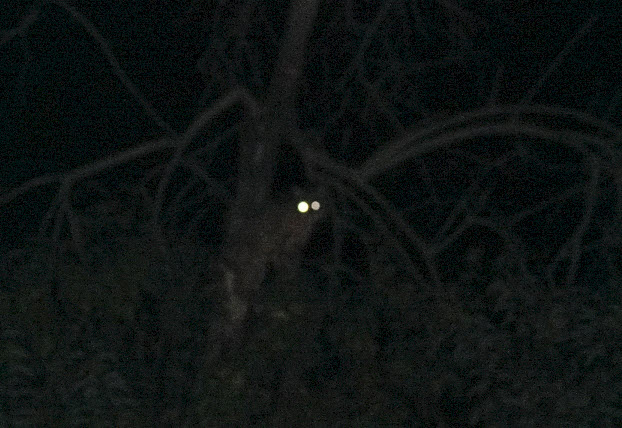 So I went up the slope to get closer, and got the 2 pics I am sharing with you today. I would have taken a few more but my wife was very scared. So I had to take her back inside and calm her down. Of course by the time I was able to go back out he was gone.

And the other animal, the bat, is the very reason of my buying a flash in the first place. I wanted to try taking pictures of bats. I knew it wasn’t going to be easy, but I thought I should be able to figure it out. So, this being my first attempt, they are not great. But the way I did it was much difficult than the method used by professionals. I set the focus of my camera to an approximate fixed distance and tried to catch the bat in flight. I took about 100 pics to get these 2, so obviously, this is not a very effective method. That and I also very recently discovered some errors in my setup.

Then, I recently subscribed to a wildlife photography magazine, called the Journal of Wildlife Photography. I have only looked at a couple of articles so far, but I can tell you this is wildlife photography at a level way above what I do. I feel like I have to go back to school.

Anyway, let’s talk a bit more about bobcats. This is a feline, in other words, a member of the cats family. It is native to North America, and being very adaptive, it can be found in all kind of landscapes. Its name is derived from its short tail. The English word “bob” is a vague word, having many meanings. But it appears that it often implies shortness and round edges. And that’s what the bobcat tails look like, short and round ended.

As you probably know, bobcats are carnivorous, so they hunt and eat rabbits, squirrels, rats, snakes, etc. But they will not turn down a scavenging opportunity. For instance, check out this picture of a bobcat defending a deer carcass against two coyotes.
They have an interesting way of walking. In order to avoid making noise, as they walk, they put their rear feet in the same spot where their front feet were. They hunt by stalking their prey, or they might lay in ambush depending on the potential target.

They usually stay away from people, but then, as I was writing this, I remembered reading recently in the New-York Times about this case:  A Bobcat Attacks, and a Husband Swings Into Action
So, perhaps, I should stay away from these guys. What do you think?